A SLAUGHTER MOST UNFORTUNATE, MOST REPREHENSIBLE 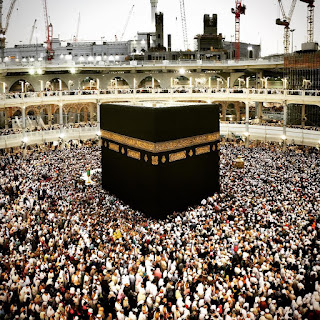 Over 800 pilgrims to Mecca performing Haj rituals died in a ghastly Stampede this week. My respectful homage to those who perished and my profound condolences to their bereaved family members. I share their sorrow and am so affected that I cannot address to this terrible issue head-on.

But first, please read the following sorrowful accounts of stampedes:
1.a. AT LEAST 40 PEOPLE WERE KILLED AND DOZENS INJURED IN A STAMPEDE
Huge numbers of ** came to ** and tried to storm the gates by force, which prompted the troops to prevent them..
This happened because authorities only opened one narrow, barbed-wire door to let them in. This sparked pushing and shoving that later saw police officers.. take action
“Suddenly they closed the gate and told us to get out through another gate” a witness told Al Jazeera.
And then this:
1.b. DOZENS TRAMPLED TO DEATH
At least ** died and hundreds more were injured after a stampede at ** last night. The tragedy happened five minutes before the end of ***
Witnesses said police started firing teargas into the crowds after violence erupted. Panic spread as the dense crowds packed into the ** rushed to escape... People were crying, people were wailing,' said Mohamed Anwar.
When police began firing gas 'there was a mad rush to get out', Anwar added. Trampled bodies were left around.. as the people tried to escape.

Finally, please read especially, this one
1.c. STAMPEDE
A stampede by masses of ** worshippers crossing a bridge ** left at least ** people dead Sunday, police said. The chaos broke out as rumours spread that ** was collapsing ..
Among those killed by the crush were ** children and ** women. Hours later, relatives were searching for missing loved ones among the bodies that were lying grouped together. Hundreds were being treated in hospital for injuries including broken bones.
-------------
No, the aforesaid accounts did NOT relate to Haj stampedes. The accounts of the latest Haj stampede are given below:
2.a. "People were going towards … while others were coming in the opposite direction. Then it became CHAOTIC and suddenly people started going down. People were just CLIMBING ON TOP OF OTHERS in order TO MOVE TO A SAFER PLACE and that's how people died.”
2.b. "People were chanting Allah's name while others were crying, including children and infants. People fell on the ground seeking help but THERE WAS NO-ONE to give them a HELPING HAND.”
2.c. "EVERYBODY SEEMED TO BE ON THEIR OWN. It affected some members of our group. I lost my aunt as a result of the stampede and at the moment, two women from our entourage - a mother and her daughter - are still missing."

Having read both sets of incidents, introspect honestly if there is any fundamental difference in the narrative of Set-A and of Set-B: same indiscipline, disorganization, chaos, selfishness, lack of trust in the organizers and lack of faith in God’s ability and will to protect, the completely worldly desperation to survive and the willingness, in this quest, to kill the hapless.

[In the Set-A accounts the first one pertains to the Cairo Football Stampede of Feb 2015 [http://www.aljazeera.com] while the second one relates to the May 2001 Ghana stadium stampede [http://www.dailymail.co.uk]. The third one describes the death of over 90 people in the stampede on the bridge on Sindh River on way to Ratangarh Temple near Datia, MP, in Oct 2013 [http://www.jamaicaobserver.com/]. The second set wholly narrates the Haj tragedy of this week]. [Capitalization is added by me]
Let us first realize that in tragedies such as stampedes it is usually the WEAK and the VULNERABLE, the gentle and the well-behaved that are more likely to suffer while the powerful make their way out. On the contrary, stampedes are usually caused by chaotic, disruptive, undisciplined and unfaithful people.
Stampede, unlike other tragedies - such as the falling of the crane, vehicular or traffic accidents, fire, climatic disasters etc – are entirely avoidable. Have we been able to avoid these? Here is a list of major Haj-related stampedes:

A TIMELINE OF RECENT STAMPEDES AT THE HAJ
• 2 July 1990 - a stampede inside a pedestrian tunnel (Al-Ma'aisim tunnel) leading out from Mecca towards Mina led to the death of 1,426 pilgrims.
• 23 May 1994 - a stampede killed 270 pilgrims at the stoning of the devil ritual.
• 9 April 1998 - at least 118 pilgrims were trampled to death and 180 injured in an incident on Jamarat Bridge.
• 11 February 2003 - the stoning of the devil ritual claimed 14 lives.
• 1 February 2004 - a total of 251 pilgrims died and 244 were injured in a stampede during the stoning ritual in Mina.
• 12 January 2006 - a stampede during the stoning of the devil claimed 346 pilgrims and injured 289. The incident happened when travelers arrived together to the Jamarat Bridge. This caused pilgrims to trip, rapidly resulting in a lethal crush. [http://ewn.co.za]
Logically one or more of the following may cause the man-made stampede:
1. The organizers did a clumsy job of crowd management
2. The crowds did not follow the organizer’s instructions, were impatient, undisciplined, unruly, merciless, too selfish to care for others, in a hurry to reach their target
3. The crowds were worried for their lives, lacked faith in both the organizer’s ability to manage the crisis and in God’s promise to protect those in His refuge
4. The organizers or some with authority interfered with the planned traffic management

Which was or were the causes of this particular ghastly tragedy? We do not know for sure. But three types of accounts have emerged.
1. The pilgrims [allegedly mainly Africans] misbehaved, disobeyed the organizers and showed undue haste, leading to chaos, soon causing a stampede
2. Traffic was suddenly misdirected to let the king, a prince or someone else with authority perform the Hajj, leading the crowds to collide, resulting in a stampede
3. The heat was unbearable and contributed to the restlessness on the part of the crowds and, after the stampede, to the casualties.
While the foregoing accounts point to the first cause blaming the crowd, the following one blames it on the organizers primarily, and the crowd secondarily:
"I discovered the reason.. that the Saudi king was performing Hajj and they did not want anyone to enter Mecca. They stopped the trains and blocked the roads. And when he finished, everyone tried to get in at once."
Sadly, if the following account of the incident as reported by The Dawn is true, even Allah showed no mercy upon the Hajis:
"The great heat and fatigue of the pilgrims contributed to the large number of victims," ** said, adding “the temperatures in Mina had reached 46 degrees Celsius (115 degrees Fahrenheit) Thursday.”

While our hearts go to those that perished or were injured, and to their relatives, we must not any more shy from asking the following:
a. Do pilgrims such as Hajis behave any better than the pilgrims of any other faith, or even the sports spectators? Do the Hajis truly have faith in Allah and believe that He can and will protect them? What difference, if any, has the Haj then made to their lives, if not filled their hearts with faith and their conduct with civility? Does this not prove that all that talk of wanting to die in Kaaba, uniting with Allah, forsaking this world et al is plain false?
b. Does Allah, indeed, protect those that do not protect themselves? Does He show mercy any more upon the Hajis than on, say, the railway passengers, football watchers, cricket fans etc? Remember that in Mumbai suburban section alone over six million passengers travel by the local trains every day. And how many die? Pro-rata an incomparably low number. Ditto for the underground Metro trains, airports et al
c. Are the Saudis competent organizers of such a gigantic event? And should the future of Haj remain at their mercy?
d. Given the constraint of space, inability to shift the location, and the rising population of Muslims, logically stampedes and similar tragedies must increase. Should the Haj, therefore, be regulated? Should the number of Hajis be restricted? Should more than one Hajj be banned?

I once again join you in the grief and wish the bereaved to draw solace and fortitude in bearing this terrible tragedy. And then I invite your serious introspection on analysing and resolving this recurring tragedy that brings into question both the Muslim’s faith and their conduct. And that of the faiths in general and of their faithful. Indeed, of the wisdom of gathering such large crowds in such small spaces.


Your ideas may help develop strategies to save some precious lives.
Posted by Unknown at 3:21 PM