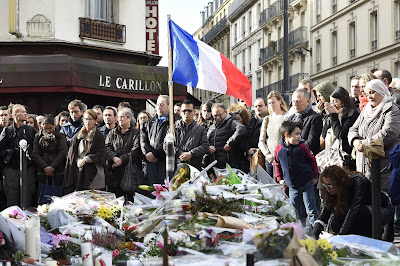 I offer my deep-felt condolences on the irreparable loss of lives, the crippling injuries and the mayhem that some barbarians created in your city yesterday. I share in your sorrow most sincerely, and wish the bereaved members fortitude
It is alleged that IS barbarians are responsible for this ghastly act. I believe it to be true. Hence I apologize to you and to all humanity – not just as a cultural Muslim but also as a fellow earthling – for not being able to protect your innocent citizens, for letting things come to this pass, for letting such barbarism take roots amongst ourselves.
Yes, I know that those who killed must have ‘a rationale’, ‘a justification’. I know that they would bill this barbarism as a revenge for their ‘oppression’ by the coalition forces.
To be frank I concede that they were not, nor any such act ever is, born in a vacuum. Each has a raison detre of its own. I know, too, that the savage plunder of Iraq, the dishonouring of its sovereignty and the continued honouring of its villains by their respective nations must have provoked and continues to fuel this clash of civilizations.
Yet, I firmly denounce the approach and the method of those self-proclaimed avengers, even if their cause were true. To be sure every action has had a cause, a reason. The crusades had theirs. Mehmood Ghaznavi had his. VHP has its own. Bush and Blair had theirs. Osama had his, too. Baghdadi definitely has his justification for his unspeakable crimes.
The civilized world has evolved consensus on how to avenge injustice. In any case any act that harms the innocent is patently unjust. Hence this vicious cycle must stop. Here, and now. And forever.
I denounce this barbarism, against your children, women and men, Paris, unequivocally, unconditionally and with full conviction.
Indeed, I hereby offer my cooperation – of whatever worth it is – to the authorities dealing with such issues. And this includes fighting the IS in any way I can, and working with the agencies anywhichway they consider me worthy of.

If Muslims cannot unequivocally, unambiguously and without any 'if's' and 'buts' squarely condemn this dastardly attack even on this day they are nothing but apologists.
What did France do lately to deserve this? What did Europe did? Provide a shelter with open arms to your migrants that your Saudi Arabia and Kuwait refused to accommodate?
Germany's football team it was that was playing France when your cowards killed the Parisians. You forgot Germany's open arms policy towards your Syrian migrants so ungratefully, so swiftly?
If IS was such an attractive proposition why didn't all these migrants instead go to it? It would have got a ready army! Why don't you seek to join them rather than postulate peace from your havens in these very democracies.
Alright, France did participate in the coalition to attack IS. Didn't we all ask them to do so? Didn't you feel impotent in controlling the devil's expansion? Didn't IS pose threat to the Muslim nations?
I refuse to belong to you. Not this day.

THIS ATTACK MUST BE SQUARELY CONDEMNED. Or I am not one of you!
Posted by Unknown at 3:51 PM